From Santa Teresa di Gallura to Tavolara there is the greatest concentration of diving centres in Sardinia. At 400 metre from the residence, on the beach “Le Farfalle”, a diving school is at your disposal where you may rent equipment, take lessons and PADI license or fill your diving tank – Dive aquarius. On the nearby beach, Salina Bamba, you will find another diving centre – Blu infinito.

Established in 1997, the Marine Protected Area of Tavolara-Punta Coda Cavallo occupies 15,357 ha of sea, with a coastline of 76.09 km, spreading from the coast of Capo Ceraso to San Teodoro. It includes the islands of Tavolara, Molara and Molarotto. 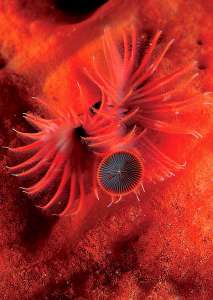 The Consortium of the Protected Marine Area Management, established in 2003 by the towns of Olbia, San Teodoro and Loiri-Porto San Paolo, works to protect the precious natural value of the archipelago.

The reserve is of great interest for its territory; morphologically diverse, it is characterized by the presence of pink granite, quartz-feldspar coastal beaches and dolomitic limestone reliefs.

The sea floor of the Protected Area is especially interesting, and features a wide variety of sceneries: in the sea north of Spalmatore di Terra, for example, large flat blocks of regular geometric shape are the remains of a fossil beach. About 15 m underwater, Secca del Papa is rich of damselfish, surrounded by sea daisies, soft corals and white, yellow, and red gorgonian. At Tegghja Liscia the sea bottom is scattered with boulders covered with sea daisies and sea sponges; going deeper it is possible to see yellow gorgonia and, among other shellfish, a specimen of Pinna nobilis reaching up to one meter of shell length. At Secca di Punta Arresto, the sandy seabed is rich in Posidonia and Sabella spallanzanii.

Located at the mouth of the Gulf of Olbia, it has the appearance of a majestic rocky massif that rises from the sea: it is Tavolara island, a granite platform made of dolomite and limestone layers. Extending over an area of 5.9 km², it reaches a maximum altitude of 565 m above sea level. The sheer walls make it inaccessible, except from the two capes, Spalmatore di Terra on the west side of the island, and Punta Timone on the east side.

The territory is divided into Zone A, strict natural reserve, Zone B, general reserve, and Zone C, partial reserve. In all zones free sailing, wildlife hunting or trapping and underwater fishing are forbidden. The diving sites are subject to regulations; 16 of them are equipped with mooring buoys, reserved for authorized dive centres. Some buoys, clearly marked and equipped, are available for individuals.

The site is characterized by a coralline Mediterranean environment, with extraordinary presence of fish, gorgonia in shades from red to yellow and sea daisies. The shallows attract big fish: groupers and gold blotch groupers, seabreams and white seabreams, roughsnout grenadiers, red snappers. Depending on the season, it is possible to find atlantic bonito, dolphinfish, amberjack, devil fish or sunfish.

ZONE A  For reasons of environmental protection, entrance to the area is permitted to Marine Area staff and authorized researchers for scientific purposes only. Guided underwater visits, authorized by Marine Area management, are permitted.

ZONE B  Diving is permitted in the areas marked by buoys, intended for diving centres. Only from 12 pm to 17 pm, the buoys positioned in the diving sites Reulino, Archetto, Cala Cicale, Occhio di Dio, Secca di Punta Arresto and Relitto Omega are available for individuals.

ZONE C  Anchorage for diving is permitted to diving centres and individuals even outside the sites equipped with buoys, while respecting the surroundings.

It is formed by a series of limestone sharp rocks that, from a sandy bottom of about 40-45 m, rise up to 16 m. The east side of the shoal is characterized by a vertical wall colonized by benthic organisms and, starting from a depth of 25 m, by fans of yellow Paramuricea clavata. The numerous cracks and cavities are home for forkbeards and big morays. Beyond the wall, the deepest rocks hide groupers, red snappers, barracudas, amberjacks and tunas hiding among the fans of gorgonian.

Suitable for all levels, this diving spot has limestone cliffs falling vertically from the surface to a depth of 8-10 m, then the sea floor gradually slopes down and there are several large boulders hosting groupers. Where the seabed is less steep there are patches of Posidonia. The presence of groups of big breams and numerous other species suggests that here the protection of environment is producing excellent results.

This large cavity opens below the majestic limestone cliff south-east of Tavolara, at an average depth of 12-14 m. Externally it is covered by green sciaphilous algae and encrusting red algae, while internally, where light does not penetrate, sponges, bryozoans and coelenterates cover every square inch of surface, creating an incredible variety of colours that only a flashlight can reveal.

The large submerged slabs north of the strip of sand Spalmatore mark the ancient fossil coastline. Once mistaken for a submerged road, the wide and flat boulders are ideal haven for white seabreams. This site is perfect for snorkeling.

A large granite dome, not far from the islet with the same name northwest of Molara island, it is covered with photophilic algae. Large groups of salema porgy and pelagic fish populate the reefs. Deeper, large boulders are home for groupers and scorpionfish.

The light playing among the peaks of granite, which rise from a depth of about 30 m to nearly the surface, create a unique environment. Among the rocks, it is easy to see barracudas and red snappers; in the shadows, filter feeders such as sponges and coelenterates make the walls colorful and popular among lovers of underwater photography.

The environment is characterized by rocky areas, Posidonia meadows and deposit. Various species of green wrasse and pelagic fish can be observed.

A series of vertical granite rocks extends from the eastern edge of Molara island. The rocks are interspersed with patches of Posidonia, where salema porgy swim. In the channels between a relief and the other there are deposits, home to whiptail stingrays and torpedoes.

About 70 m long, the French merchant steamer was sunk, probably by mistake, by a Dutch submarine in 1941, during the Second World War. Its wreck lies on a sandy bottom at a depth of about 39 m. The remains of the structure are colonized by congers, big goatfish, seabream and groupers.

Near the rocks Cerri (or Tre Fratelli), less than 2 km east of Molara island, the wreck of Omega lies at a depth of 16-19 m; it sunk in 1974 and broke into sections. During autumn, it is home for pelagic fish such as amberjacks and tunas. The site is ideal for beginners for its moderate depth and exceptional visibility.

The moderate depth and variety of habitats (rocks, sandy and Posidonia areas), are ideal for different species. The site, especially suitable for night dives, is easily accessible and protected from mistral wind.

It is a very wide shoal, made of granite domes, that offers picturesque views of large rocky areas. It is populated by schools of barracuda, groupers, morays. The rocks are surrounded by large Posidonia meadows and deposit areas.